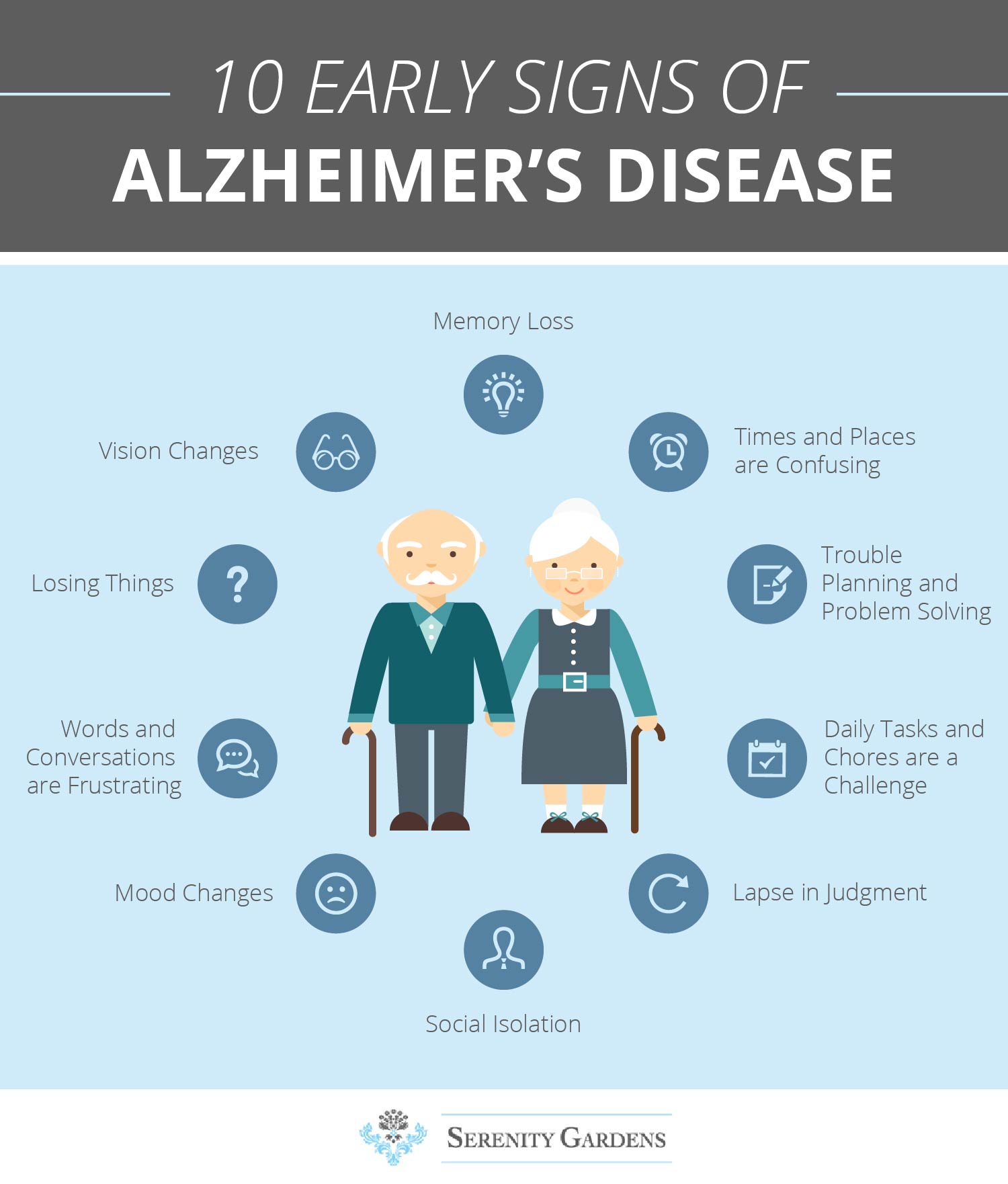 Alzheimer’s is a degenerative disease that causes a slow decline in memory, reasoning, and thinking. Because it has a very slow onset and progression, sometimes it is easy to miss the signs before the symptoms begin to impact daily life and eventually become debilitating. Here are ten early warning signs and symptoms of Alzheimer’s disease:

Maybe it seems obvious, but in initial stages, it may manifest as forgetting the small details or specifics. Over time, people may notice they increasingly require aids such as lists, calendars, and reminders to remember. Friends, families, and even the person suffering the changes may not notice the subtle changes until they begin to forget big things such as names of family members.

#2 Times and Places are Confusing-

People with Alzheimer’s often lose track of times and dates, due to memory loss, which makes it difficult to orient to the now. This makes it difficult to understand what is going on and sometimes how they got to where they are. These changes can also manifest slowly and be easy to ignore as being confused.

Keeping track of monthly bills or keeping plans becomes increasingly difficult when a person cannot recall what the goal is. Tasks such as following a recipe can even be difficult if short-term memory begins to fade. Again, these symptoms may show slowly, perhaps a bill is forgotten or chocolate chips left out of the cookies, that are easy to pass off as simple mistakes anyone can make. Look for patterns and trends.

#4 Daily Tasks and Chores are a Challenge-

This is typically the first obvious, overt sign that memory problems are becoming debilitating, but often times people are too embarrassed to tell others. Everyone has a routine they follow, when steps begin to be forgotten, it is a clear indication of some sort of dementia.

Critical thinking and sound logical reasoning are difficult skills to maintain when memory begins to be an issue. Lapses in judgment such as accusing others of stealing something (usually that has been misplaced and they cannot recall where they put it) or giving money to anyone who asks is common behavior in Alzheimer’s patients.

As memory begins to fade, it makes remembering details and keeping up with conversation difficult. Many people are embarrassed to let others know or are too frustrated to attempt normal social interaction and begin to withdraw from work or social activities. It is no wonder depression and dementia are closely related.

#7 Words and Conversations are Frustrating-

Memory loss affects the ability to recall information, to include forming words and phrases. If someone “can’t seem to find the right word” frequently, stops speaking in the middle of a sentence and can’t find their place, or finds difficulty in joining or maintaining a conversation, it can indicate early dementia. Due to the memory loss, they may repeat themselves or get lost in a conversation completely.

Being perpetually confused and disoriented can lead to mood swings and alterations in brain function can lead to personality changes. People who suffer from Alzheimer’s may become confused, suspicious, depressed, fearful, or anxious.

Increased loss of items relates directly to forgetting where items are put. Increasingly finding things in unusual places indicates a severe memory problem, where items were left in the middle of a task or the object is now unfamiliar and where to put it away is confusing.

For some people, Alzheimer’s disease affects vision and spatial awareness. This makes it difficult to read and judge distance.

Knowing the signs and symptoms of Alzheimer’s disease can make you more aware of the subtle, early changes in loved ones. If you need help with Alzheimer’s care in League City, Texas, contact us at Serenity Gardens Memory Care .