In a robust brain, we are able to process all movements, memories, thoughts, sensations, and feelings with signals that are going rapidly to and from the brain — they are largely what makes us, us. However, in a brain in which a person is suffering from dementia, the quality of life is reduced dramatically because the ability to carry out day-to-day tasks is greatly impacted.

Dementia and Alzheimer’s disease are conditions that worsen with time. They often leave people confused and in dangerous situations because their cognitive abilities are impaired. At Serenity Gardens, we provide refuge. A refuge that is home. We help guide and assist those who are suffering by providing a safe place to live in a stimulating environment. Join us in today’s post as we examine how the brain is altered by dementia and Alzheimer’s disease.

The Altered Brain – Dementia and Alzheimer’s

Dementia is progressive and often develops into different brain disease including Alzheimer’s.

The symptoms of Alzheimer’s include:

Both dementia and Alzheimer’s affect the whole person, with the brain being the organ that is most impacted. Below are different regions of the brain that play a role in both brain conditions. 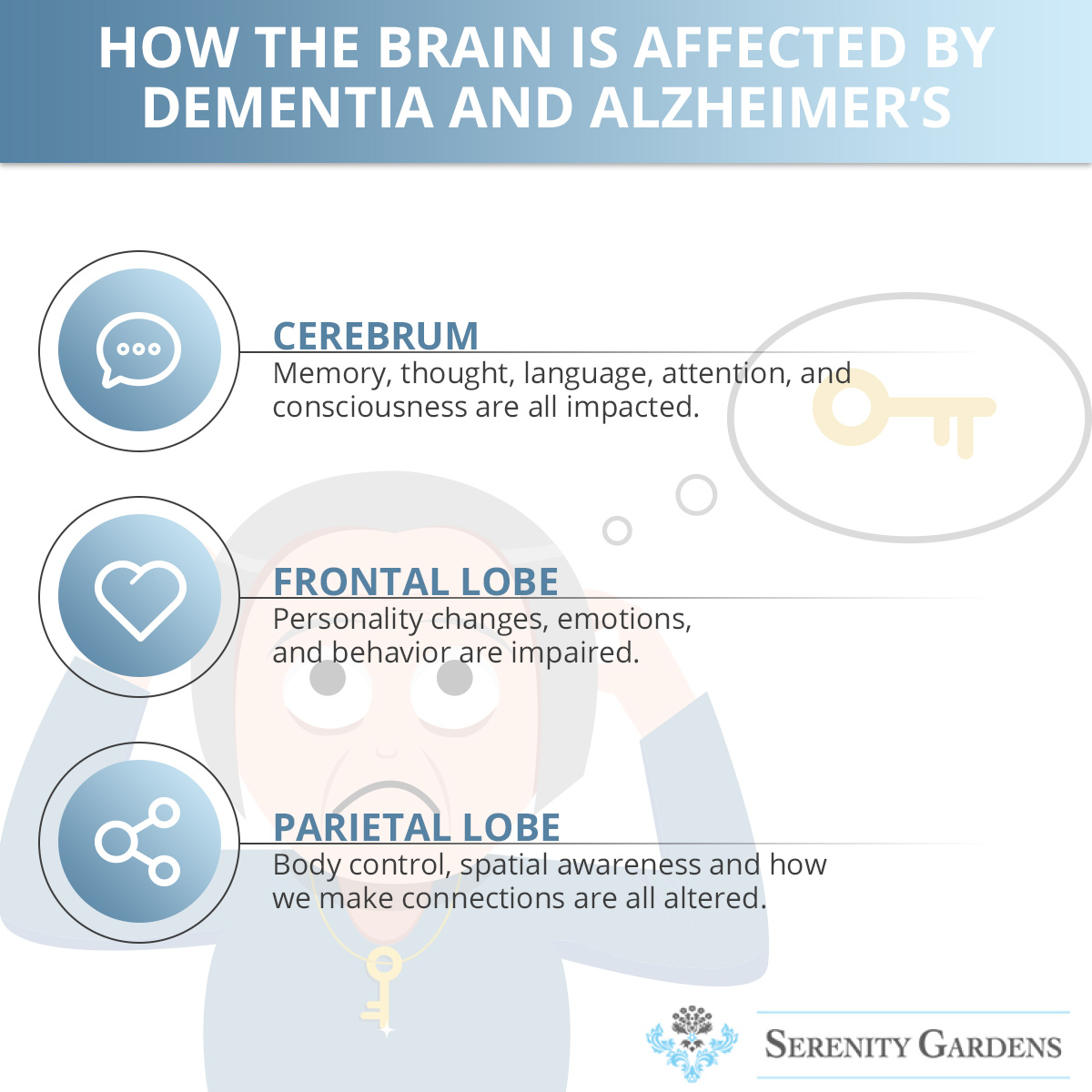 The cerebrum is the largest part of our brain and controls vital functions such as attention, memory, thought, consciousness, language, movement, and senses. In dementia, the cerebrum is affected as a result of reduced blood flow in this region. Blood carries critical components such a oxygen to the brain, and when this ceases the brain cells die.

The frontal lobe is responsible for much of our personality, behavior, and emotions as it gives us a sense of good and bad as well as an understanding of the consequences from those actions. The frontal lobe assists us in identifying social norms, in addition to storing long-term memories.

When a person has dementia or Alzheimer’s, it is thought that there is a protein buildup in this region affecting behavior and personality changes.

This area of the brain is responsible for calculations, reading, and writing — it helps us sequence things and put them in order. People with brain diseases are affected by protein buildup and it can affect their vision, causing a decline in spatial awareness.

This part of the brain helps put things in context of what we hear and see around us. It distinguishes faces, scenes, and objects, as well as helping with language skills and naming and remembering words.

The specific region that is affected by Alzheimer’s is the hippocampus. Two proteins, tau and amyloid begin to build up in the hippocampus and eventually spread throughout the brain as the condition progresses. This is where disorientation and memory loss begin to manifest.

Dementia and Alzheimer’s effect every part of the brain and can rapidly diminish the quality of life in those battling it.

To learn more about our memory care facility that caters exclusively to people with dementia and Alzheimer’s, connect with us today.