Put on your diagnostician hat for a moment and review this patient case file: 83-year-old Bill has recently been suffering from apathy, loss of interest in activities and hobbies, social withdrawal, isolation, trouble concentrating, and impaired thinking that seem to be getting worse since his wife’s death last year. His family is increasingly concerned because he does not get dressed every day anymore and seems completely disinterested in eating. He is even incontinent sometimes, and a few days has refused to leave his bed. Convincing him to shower seems to take an act of Congress and when he does speak, he reminisces about the good old days. Based on the given information, what would you consider diagnosing Bill with? If you said depression, you would be correct. However, if you said dementia, you would also be correct.

There seems to be an uncoincidental number of overlapping signs and symptoms between memory loss and depression, but does one cause the other? While the jury is still out on a definitive answer, the data does seem to support a strong ‘yes.’ Many studies have been conducted and have proved a causative link between depression and memory loss, that may eventually lead to dementia. There are several different theories including depression is an early symptom of dementia, brain damage caused by depression also leads to future dementia, and depression is caused by the same brain damage that causes dementia. A staggering 40 percent of patients who suffer from Alzheimer’s Disease also suffer from depression, which may be low because of the difficulty in diagnosing an Alzheimer’s patient with depression. The Depression-Dementia Link certainly seems to exist, but which one is the cause and which one is the effect? Does one imply the other’s existence?

Researcher, Robert Wilson, is convinced and attempted to prove that Depression is a causative factor of dementia. He recommends early treatment of depression as a preventative measure in reducing your chances of dementia later in life. Because a common symptom of depression is memory loss, when a patient suffers from dementia, depression can exacerbate memory loss and confusion. 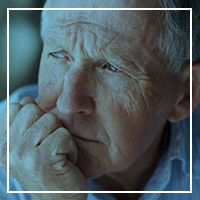 A difficult part of Bill’s situation is if he makes statements such as “ I’m ready to go to heaven,” we may interpret as depression or hopelessness. However, he could simply be processing the grief of his own impending death and has come to peace with the idea of him leaving the earthly world. Acceptance is common and an important step in end of life. These thoughts get much more muddled in a person with severe dementia. It is critically important to keep an open eye for symptoms of depression in your loved ones who suffer from any variation of memory loss. Although “hugs and drugs” is an effective treatment technique, it is important to respect your loved one’s end of life plan and wishes and be realistic about treatment options. Those suffering from Alzheimer’s or any dementia/depression combination, living in a Memory Care facility may help ease symptoms and provide better outcomes for everyone. If your loved one suffers from dementia and any other comorbidities, consider Serenity Gardens Memory Care facility. Contact us for more information today!