Alzheimer’s disease is the most common form of dementia that affects memory, thinking, problem-solving, and language. Alzheimer’s disease is caused by a build-up of proteins that form plaques and tangles of tau in the brain. These plaques and tangles cause the breakdown of nerve cell communication that leads to neuron death and loss of brain tissue. In 2015, 818 billion dollars was spent on treating dementia caused by Alzheimer’s disease, and that number is estimated to exceed one trillion dollars this year. As the world’s population continues to age, more efforts and research are being focused on Alzheimer’s disease and finding a treatment or cure. As we discover more about the disease process and the inner function and working of the brain, some scientists are certain they are nearing answers, and clinical trials for some treatments are currently already underway. The future for Alzheimer’s treatments looks bright, despite the fact that there is currently no known cure.

Several drugs that are currently undergoing studies, called monoclonal antibodies, work to help the body’s own immune system to target the beta-amyloid protein. This beta-amyloid protein is the microscopic protein that is responsible for the plaque clumps that form in the brain. Focusing the body’s immune system on these proteins can help eliminate them from the body before they are able to form plaques or can help break up the plaques to restore nerve communication.

Fyn is a naturally occurring protein that, when combined with beta-amyloid, causes an overreaction. Stimulated Fyn proteins are responsible for the destruction of connections between nerve cells in the brain. A previously researched cancer treatment, saracatinib, has proved its effectiveness in “turning off” Fyn, preventing the destruction of nerve cell connections. Human trials are currently underway for this medication.

A non-medication treatment aimed at eliminating protein plaques in the brain includes ultrasound-delivered sound waves that help open up the blood-brain barrier and stimulates the microglial cells, which are the brain’s waste removal system. These cells can help clean up the protein build-ups that cause memory loss in Alzheimer’s patients.

Tau is a naturally occurring brain protein that helps to keep the neuron transport system organized in orderly strands. Neatly lined up strands operate like railroad tracks transporting molecules,cell parts, and key nutrients to keep neurons healthy and communicating. Sometimes, tau collapses into tangles that prevent transportation and leads to cell death. Tau aggregation inhibitor medications and vaccines that would activate an immune response when tau begins to tangle are currently being studied in clinical trials. 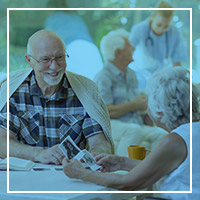 While the link between diabetes and Alzheimer’s is not well understood, there have been improvements in cases where diabetic medications — pioglitazone and insulin — have slowed the progression of Alzheimer’s. It is unclear if it is due to increased insulin use by the brain or a decrease in low-level brain swelling. More research is being conducted to find causative links.

Again, the link between menopause and Alzheimer’s disease is unclear, but some studies do show an improvement in thinking, cognition, and memory in menopausal women who used estrogen-based therapies. This treatment seems to only help combat the symptoms of dementia if hormone therapy is started at the right time — the right time is currently not well understood and is being researched.

Growing evidence makes strong correlations between heart health and Alzheimer’s disease. While this is not to say that all cardiovascular diseases cause Alzheimer’s, and vice versa, there does seem to be a higher risk of Alzheimer’s in patients who have poor vascular health. Many Alzheimer’s patients have comorbidities that include hypertension, heart disease, diabetes, and high cholesterol, or history of stroke. Treating heart disease and improving vascular health is well understood and uses a combination of drugs and lifestyle changes. Having a healthier heart can mean having a healthier brain too!

While we do not, yet, have any clear treatments or cures for Alzheimer’s disease, the future is bright. Research has already yielded promising options that are being tested and will hopefully be available for patients in the not-so-distant future. More prevention methods and lifestyle changes are being understood and promoted that may negate the need for treatments and cures. With an aging population and a current 50 million Alzheimer’s sufferers worldwide, the hope is to fight the prediction that by 2050 the world will have more than 135 million afflicted persons.

At Serenity Gardens, we are dedicated to the care and treatment of those who suffer from memory loss and dementia. Although we are not conducting research in our memory care assisted living facilities, the work we do is important in answering questions about the disease process. Our staff members are experts in caring for those who find it difficult to care for themselves due to Alzheimer’s disease or similar disorders. Contact us for more information about memory care or to schedule a tour of one of our facilities.