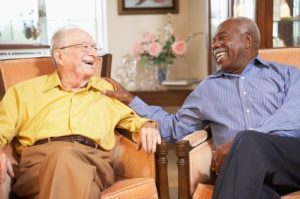 When my father suffered his first heart attack, my mother stepped up and took care of him. She learned everything that she could about heart care and the proper things that she could do to help ensure that he was still with us for a long, long time. She was a warrior, or so we used to joke about, because no matter how she was feeling, she was always ready to make sure that our father had the best of everything.

I’m not sure why she suffered her own heart attack last month, but it was a massive one and there was no hope for her by the time my father found her on the bedroom floor one afternoon. It has taken all of us some time to mourn her loss and in the meantime, my sister and I have been working diligently to try and pick up where she left off.

My father, though, seems to have lost the will to fight and when we talked about the different options for his care, he said that he would rather move into assisted living. At first, I thought that maybe he blamed himself for our mother’s passing, but in truth he didn’t think that at all. He merely knew that he required more care than my sister and I could offer without giving up part of our lives in the process.

My sister mention that he could hire an in home caregiver, but he didn’t want to deal with that, he said. He wanted to move. The memories were too strong for him and he couldn’t even think about sleeping in the bedroom again. Perhaps in time his attitude would change, but he was determined to find an assisted living facility where he could live on his own and also be surrounded by other people his own age, if he felt so inclined.

We took him to visit a few facilities in the area and we found one that seemed to have the right feel and amenities for him. He wasn’t much of a cook, though he did make an incredible meatloaf from time to time. This new apartment home of his would have a small kitchen area, but they also served meals from their cafeteria, in case he was in the mood for something else.

My father, I think, had thought about assisted living for some time and when he lost the love of his life, it made sense for him. Today, he’s making friends and he’s getting great care for his heart condition.

When researching options for assisted living facilities in Houston, TX, call us at (832) 315-3219. Assisted Living counselors at Serenity Gardens are available to talk with you about your caregiving needs while providing better, affordable care for you or a loved one.