Dara’s mother was going to be moving into an assisted living facility within a few weeks, but one thing that had been nagging at Dara’s mind during the time leading up to this move was the safety of the facility. Her mother wasn’t keen on the idea of assisted living in the first place and it took a lot of effort to convince her that it was the best thing for her.

Dara talked about all of the activities that she’d be able to take part in and the people that she would meet, and even through all of the encouragement and discussions, her mother was wary of the entire concept. When Dara hung up the phone after talking to her mother for more than an hour about packing and getting ready for the move, something was bothering her about what her mother said. 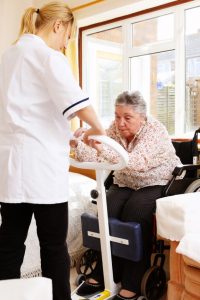 She didn’t know the first thing about whether this assisted living facility was safe or not. She just assumed that since it was a closed community where guests had to register at the front desk and there was a security guard on the premises, that didn’t mean that it was safe, did it?

Dara spend the rest of the night trying to think about how she could find out whether the safety of this assisted living center was top notch. She certainly didn’t want anything to happen to her mother.

Thanks to the Internet, Dara was able to search the facility and find a host of information, including some older news articles that highlighted the safety of the facility. There had never been a major incident at the center in more than 15 years in operation. There were two minor fire calls, both from incidents in the kitchen and neither of them put the residents in any risk.

She then found some review sites that helped her understand that the facility was highly rated by many of the family members who had loved ones there.

The next morning, Dara called the administrative staff at the facility and talked to them about her concerns. They walked her through their emergency protocols and assured her that they had never had a major emergency or safety breach in all of the time that they had been caring for elderly residents.

The best way to check on the safety of an assisted living facility is to research online, visit the local newspaper headquarters and look up the facility in the archives, and talk to the administrative staff to see what precautions and measures they have to ensure the safety of their residents.

When researching options for assisted living in Dickinson, TX call us at (832) 315-3219. Assisted Living counselors at Serenity Gardens are available to talk with you about your caregiving needs while providing better, affordable care for you or a loved one.